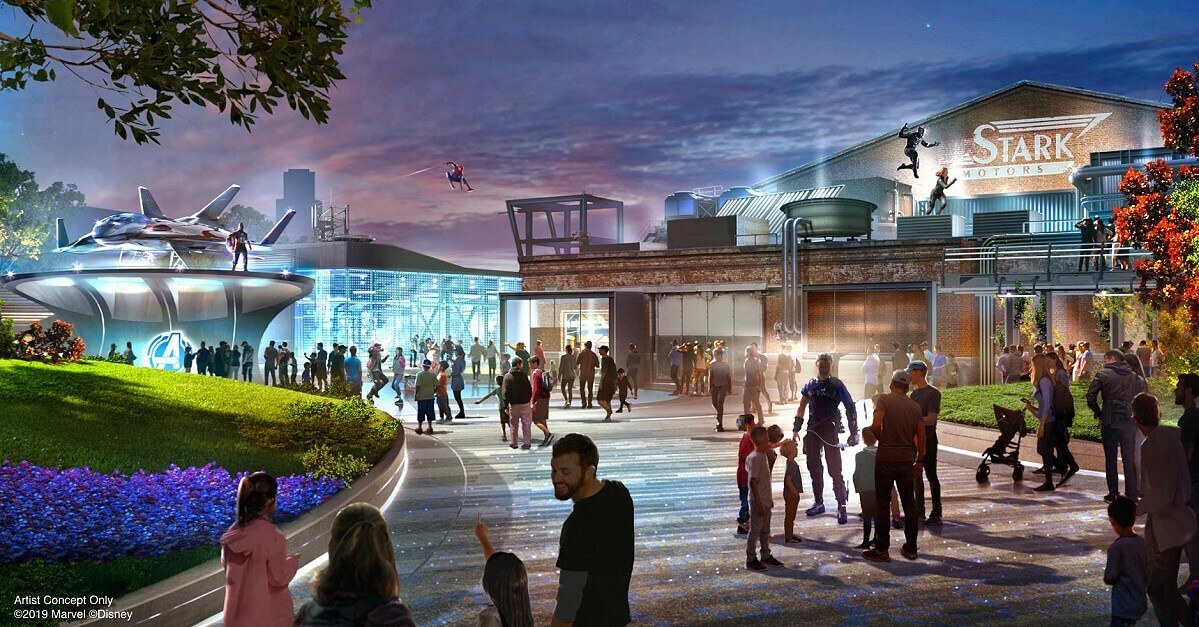 As part of the D23 Expo in Anaheim 2019, Bob Chapek announced that the area will be called Avengers Campus. He also revealed that visitors will have the opportunity to support the Avengers in their fight to save the world.
The Avengers Campus is said to be an Avengers training center where the superheroes train and improve their skills. Another special feature will be that the area will be part of a global network that will extend from Paris to California to the Disney Cruise ships.
While Paris and Anaheim will each get an Avengers Campus, the Avengers Xandarian Outpost is being built at Walt Disney World. At Hong Kong there will be the Stark Expo and at Shanghai a base station like a residence, for the Avengers and their missions. The Cruise Line ships will serve a mobile bases of the Avengers - with which they can reach any place in the world for their tasks. A truly global network!

Opening between 2021 and 2025!
In contrast to the other two areas announced (Frozen and Star Wars) we have a few more details.
The new Marvel Land will cover the former Backlot, so a part of the Walt Disney Studios Park that already exists. That makes the whole thing a bit easier for us, since we already know this area and can interpret something more into the concept drawing for the Marvel Land. On the other hand, we are not only dealing with rumors and speculations, since Disney has already announced some concrete changes to the Backlot and these are already in progress.
The CinéMagique show was performed for the last time in 2017. Since then work has been going on in the building and in June 2018 the reopening took place as part of the brand new Marvel: Summer of Super Heroes season. "Alliance des Super Heroes", the French title, is a 360 degree stunt show featuring Spider-Man, Iron Man and other Avengers.
A lot has happened since April 2019. The Armageddon: Special Effects attraction, the building was torn down and a new Spider-Man inteeractive slighshot ride, which will work in similar to Toy Story Mania in Disney's Hollywood Studios in Walt Disney World, will be build here. In addition, the Rock'n'Roller Coaster closed September 2019. It has long been known that this roller coaster will be transformed into an Iron Man attraction. So it is moving forward and the opening of this new area will be happen pretty soon.

The roller coaster Rock'n'Roller Coaster starring Aerosmith made its last laps in early September 2019. At the D23 Expo in Japan, which took place in early February 2018, Bob Chapek announced that this roller coaster will receive a Marvel-Theme.
With great certainty nothing will be changed in the track layout, so the popular launch directly into the loop will be maintained. Also the onboard sound will be part of the experience in the future.
In the end there will be a redesign of the building and the ride itself will be integrated into a story. We can be curious about the result!

The big optimists, who thought that the newly designed roller coaster could open for the 2019 Marvel Season, were unfortunately disappointed. Because it was clear relatively quickly that Rock'n'Roller Coaster would not close until September 2, 2019 to be redesigned. A date for the reopening is not yet known. In the meantime, however, construction is going on there diligently and nothing is left of the big Rock'n'Roller Coaster emblem above the entrance.

In addition to the already confirmed attractions and shows, the new Marvel Land offers a lot more space, so we can definitely look forward to at least one, probably even two new attractions. A restaurant and a shop are also part of this new area.
At the moment there is already the possibility to meet Spider-Man. It is not yet known whether this meeting will be preserved or whether there will be more extensive meet & greet opportunities, but in our opinion it is very likely.
On the concept art that Disney has published, where the Armageddon: Special Effects attraction is today, you can see a building that is very reminiscent of the concept art for Ant-Man at Hong Kong Disneyland. Here, however, a Spider-Man attraction will move in at Paris, which follows the concept of Toystory Midway Mania, a so-called sling-shot ride, as is also known from Maus-au-Chocolat at Phantasialand.
Somewhat more mysterious is the building at the back of the concept art, which is in the place of today's moteurs, action ... stunt show. A new Avengers Meet & Greet will be created here, at least according to all current information.
Instead of the current stunt show, there is speculation about a newly organized stunt show themed about the Guardians of the Galaxy. The future will show what the Imagineers have considered for this area of the new Marvel Land.