The term Disneyana usually refers to things like books, animation phases, movie posters, souvenirs from the theme parks and many other items that were produced by the Walt Disney Company or are closely related to it.

At Disneyland Paris there are of course plenty of items that fall into this category and anyone who takes home a souvenir from Disneyland can count themselves among the owners of Disneyana.

There is of course a little difference between collectors and fans as rarities and limited items are of course much more popular than any toy or book that is offered in the shops of the resort.

In some Disneyland shops, such as the Disney Gallery at Disney Village and Harrington's on Main Street as well as the Art of Animation Shop at the Walt Disney Studios, a large selection of "special" Disneyana is offered. In addition, there is the boutique in the Hotel New York, where there are above all very nice collectible figures to buy, and the Pueblo Trading Post in Frontierland, where primarily pins are offered at the weekend.

Classic Collection and other collectible figures

Disney characters from a wide variety of materials are not only among the most popular souvenirs from Disneyland Paris, but are also extremely popular collectors' items.
Mickey Mouse, Bambi, Dumbo and many other popular characters from the Disney universe are made of clay, porcelain, resin and other materials, painted and sold in selected shops at Disenyland Paris.
Some of them are simply a nice souvenir, others are handcrafted and therefore real rarities.

Disney by Romero Britto
The Brazilian pop art artist Romero Britto has designed Mickey characters and other collectibles (cups, plates, etc.) for Disney in his inimitable style, which uses bright colors and bold patterns.
This colorful series is not limited, but is one of the most beautiful souvenirs for many resort visitors.
Colorful and fancy Disney by Romero Britto figures on eBay

Snow globes
No, there are not just snow globes with Black Forest girls or the backdrop of a city in the Harz Mountains. Disney knew how to create true masterpieces. The snow globes come in a variety of sizes, from the format of a coke can to a shoe box. They are integrated in imaginatively designed film scenes or scenery of the theme parks, some play music, others just let it snow.
For many Disney fans, the snow globes are among the most popular collectibles.

The Art of Disney on Demand

Many fans of the Disney Parks have looked for the popular attraction posters, but could not buy them anywhere. Sketches of characters for film scenes or comics have also been very rare so far.
But now there is "The Art of Disney on Demand".
Motifs from the theme parks, character studies, attraction posters and film posters are just a few examples of the large selection that is now available. However, you cannot take the desired motif home with you, but have to be patient for a few days until it reaches you by post.

How does it work?
It's actually very simple! You go to the Disney Gallery at Disney Village. There you will find several Displays right next to the entrance, where you can view all available motifs. With a few clicks you can put together your Disney artwork, determine size, material, frame etc. 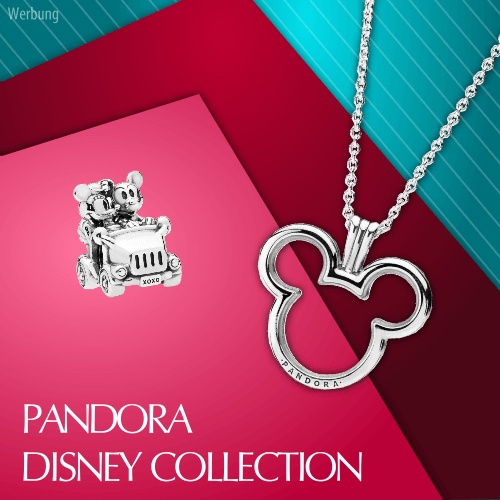 Disney Pins are very popular collectibles. However, they are not only collected, but also actively exchanged. Pins are available for a wide variety of occasions and in a variety that is hard to overlook. There are limited and over-the-counter versions, there are variations on individual characters or on attractions and many others. Once you start collecting and trading, it is difficult to stop.

You can learn more about pin trading here.

Didn't get the pins you desperately wanted? Check out eBay for them!

Small vinyl figures shaped like Mickey Mouse are a fairly young and short-lived phenomenon among Disneyana. The colorful figures first appeared in 2008 and quickly became extremely popular. But interest in them died out almost as quickly. In the meantime, the vinylmations can hardly be found in the Disney Parks.
Usually there were series that were offered in sealed packaging, so you didn't know which figure you got. Of course, this had a special appeal for collectors.

More information about the Disney vinyl mations can be found here.