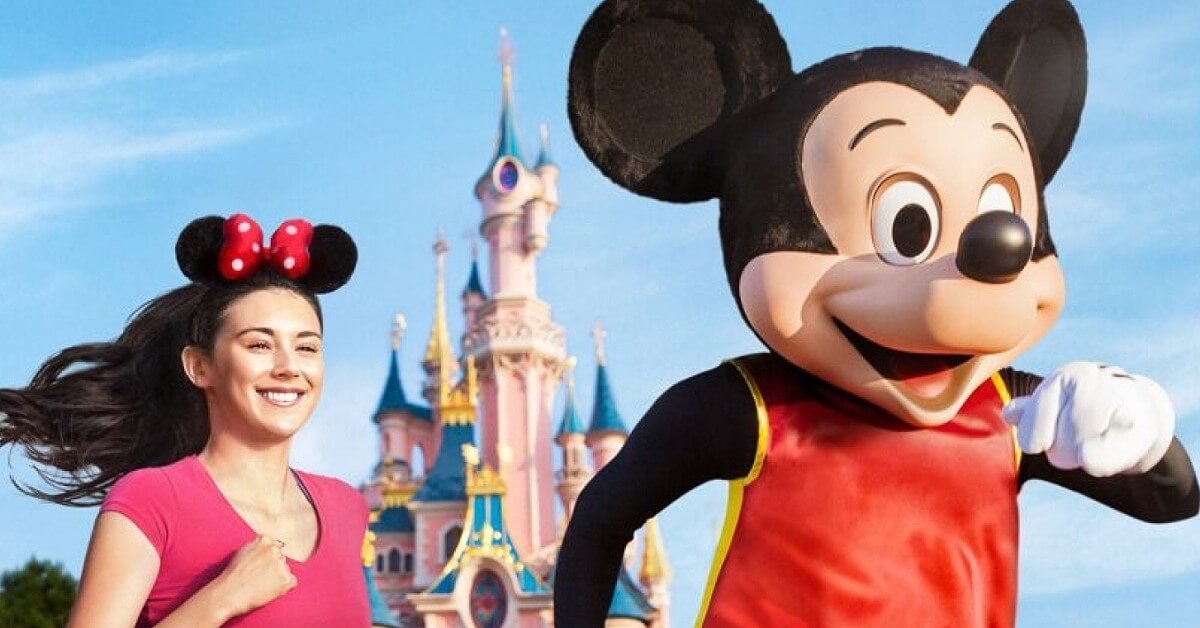 Disneyland Paris has its own runDisney event! The Magic Run Weekend.
After these events at Disney Parks in the USA are extremely popular, runDisney has been available in Europe since 2016. Since the first running event in autumn 2016 was a complete success, this event has been held regularly since then.

In autumn, more precisely on a weekend in September, the Disneyland Resort Paris turns into a paradise for runners and sports enthusiasts. From experienced runners to the youngest, there will be a suitable race for every level.

The half marathon is the heart of the weekend, but there is a lot more to do. Disney characters are there to cheer and on many other occasions at this event.

By the way, runDisney is the ideal opportunity to bring your passion for running and Disney under one roof while having fun with the whole family and many friends. Since 2018 there has also been a motto for the weekend. In 2018, for example, everything revolved around the Disney villains, you could meet them at various points on the course during the runs. By the way, the half-marathon not only includes the characters matching the motto on the route, but also a lot of other Disney characters, so that you can always make a short stop to catch your breath and take a photo. Or you take it sporty and try to run at your best without interruptions.

The main event of the runDisney weekend is the half marathon, which is officially called "Disneyland Paris - Val d'Europe Half Marathon". The route is 21 kilometers long, which all registered runners can tackle along on Sunday morning.
The route goes through the two theme parks: Disneyland Park and Walt Disney Studios. Start and finish are at the Disney Village, as this is also the area where the runners can meet and relax with their relatives after the end of the race.
The run takes you across Main Street towards Sleeping Beauty Castle, over Hollywood Boulevard and past the Tower of Terror. Of course, the entire route cannot move within the two parks, so that it also leads through the towns in the surrounding area before the finish line is reached at Disney Village.

Along the route, the runners are not only cheered on by family, friends and people who love running, but also by the Disney characters - certainly a very special motivation.

At the end of the run, the best runners will be honored, but even those who could not line up in the front do not go away empty-handed, but receive one of the exclusive medals for participants.

Castle to Chateau Challenge
To successfully complete this challenge and receive a very special medal, you must have completed the half marathon in Paris and a half marathon or marathon in one of the Disney Resorts in the USA within one year.

Further challenges at the MagicRun Weekend

2019 is the second year in which the running event at Disneyland Paris is themed. This year, however, it was not as clearly described as in the previous year. Basically, the adventure is in the foreground, after all every run is an adventure, at least for some runners.
Peter Pan with Wendy and Tinkerbell are the godparents for the runs for children, Simba from the film "The Lion King" for the 5k run, Mickey Mouse and Minnie Mouse are the focus for the half marathon. The 10 kilometer run is a bit off the mark, because in 2019 it will be called the Princess Run.

The medals that can be won at the Magic Run Weekend 2019 reflect the namesake of the respective run.

2018 was the first year in which the RunDisney event at Disneyland Paris had a motto: it's the Disney Villains! It is common in the US parks that the running weekends have a motto, for example there is a princess run or a Star Wars event.
In Disneyland Paris, the Villains took control of the MagicRun Weekend in 2018.
That means all runners saw some of the villains and bad guys from the Disney films.

Program 2018:
On Friday at the 5-kilometer race, Thanos took over and brought the Marvel universe to life.
On Saturday at the 10 kilometer run the sidekicks of the most terrible villains were present and during the children's race Stitch and his alien friends came along.
The most famous Disney Villains were part of the party at the half marathon on Sunday, which was the end of the event.

Are you fit and want to show everyone what you're made of? Then take part in the 10 kilometer race at Disneyland Paris!
If the distance of the half marathon is too long for you and you are looking for a shorter alternative, then this race is just right for you! Or are you looking for the ultimate challenge and want to prove something? Then of course you can also take part in the half marathon, the 5-kilometer run and this race!

Participants in the 10-kilometer run must be at least 14 years old on the day of the race (the upper limit is open) and submit a medical certificate that confirms your fitness for participation in this event.

The route of this race takes you across the resort area, with characters and cast members cheering you on.

In the end, of course, the best runners will be awarded and every participant, even if not among the top 3, will receive a medal

Facts & Figures about the 10 kilometer race:

For those who don't dare to do the half marathon route, there is still the opportunity to be sporty at the runDisney event: the 5 kilometer run is the alternative for all amateur runners!

Whether you are a beginner or have the greatest successes of your running career behind you, whether you want to compete alone or with the whole family, the 5 kilometer run is the perfect choice.

To take part in this run, each participant must be at least 5 years old on the day of the race (the upper limit is open). You must be able to present a medical certificate that confirms that you are in good health to manage a corresponding run.

The 5 kilometer run takes you through Disneyland Park and Walt Disney Studios Park. While you are cheered on by Disney characters and spectators, you will pass the Sleeping Beauty Castle on Main Street, U.S.A., also the Hollywood Boulevard and the Tower of Terror.

In the end, of course, the best runners will be awarded. But even if you are not among the top 3, you will receive one of the medals for participants.

Data and facts about the 5 kilometer run:

For the little ones: kids race

Children can also take part in the runDisney event! Of course, the half-marathon route is too long for the youngest participants, but all children who love running do not have to do without, because there are different kids races!

For all children from the age of 5 there is the possibility to participate in the 5 kilometer race together with their parents, in addition there are various shorter distances.
100m, 200m and 400m can be completed by the very small children, for the slightly older kids up to the age of 12 there is also the opportunity to prove themselves on a 1 or 2 kilometer route.
Parents can tackle the running route with their children.

All runners - regardless of the route length chosen - receive a participant medal.

Of course there are also awards and prizes for the successful graduates of the half marathon.

All registered participants will receive a medal upon successful completion of the race. Every run and every challenge has its own medal.

Of course, safety comes first! Therefore there are also some safety regulations for the runDisney event that you should know beforehand.

One factor that affects the safety of all participants is the weather. It is not important for this running event whether the sun is shining or it is raining, but if exceptional weather conditions occur, the race can be postponed or, in extreme cases, canceled.

For safety reasons, it is prohibited to take strollers, inline skates, roller skates, scooters, bicycles, skateboards, walking sticks and animals on the running route. All runners should also do without headphones or earplugs in order to fully understand loudspeaker announcements on site.

Costumes are allowed in principle, but no masks. The face must be clear for safety reasons.