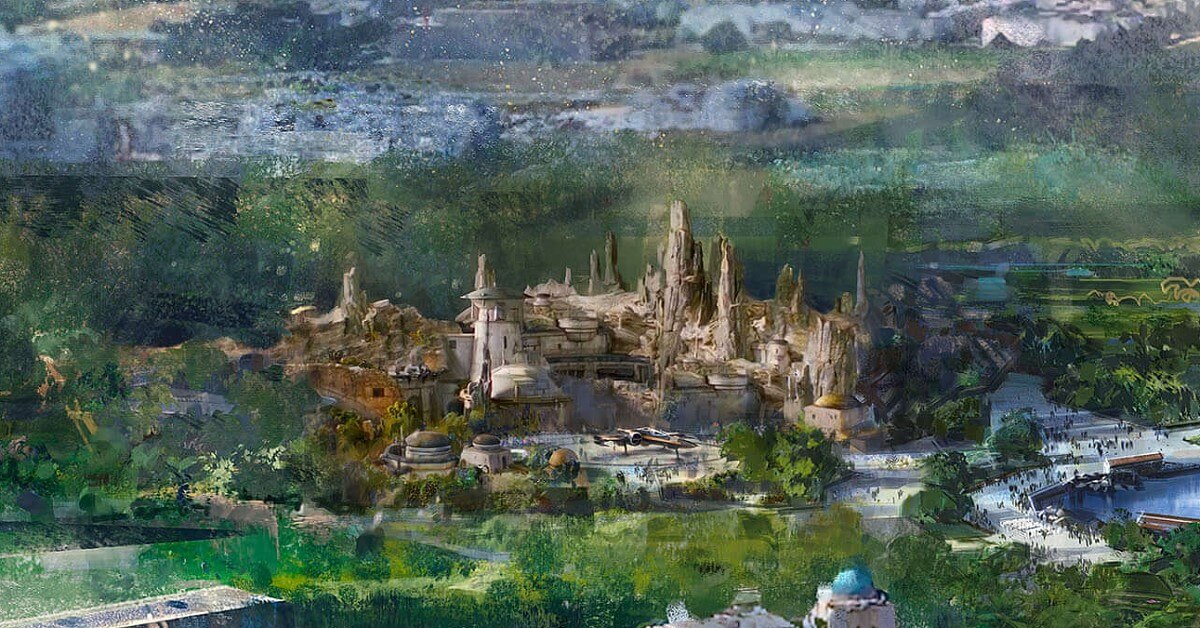 Feel the force in you! Star Wars fans will love this new area!

The Walt Disney Studios Park will get a Star Wars Land! Bob Iger officially announced the news on February 27, 2018. The area is to be opened between 2021 and 2025 - so a little patience is needed. Especially since we think that Star Wars will not be the first of the three new areas and therefore assume that the opening date for Star Wars Land will be around 2023 or 2025.

Opening between 2021 and 2025!
What the area will be called and which attractions, shops and shows it will host, is not known yet. However, it is not unlikely that it will be very similar to the two Star Wars Lands that opened in 2019 at Walt Disney World and the Disneyland Resort in Anaheim nut with just one instead of two attractions. At least that's what the concept art that Disney published for Paris suggests. In terms of appearance, this concept drawing is very similar to the designs for Star Wars Galaxy's Edge - this is how the Star Wars areas in the US parks are called. Why should Disney completely turn these plans upside down when they are in good shape and appear to be easy to implement? We therefore think it very likely that Disneyland Paris will get its own Galaxy's Edge, but it should be a bit smaller than in the other two parks. And the involvement of visitors into the story to increase the immersiveness of the experience, which is an essential part of the concept in the US parks, will very likely not be able to be implemented in Paris because the language barrier is simply too big. So what would that mean for Disneyland Paris? What Star Wars style attractions can we look forward to and what else is on offer? Let's take a look at the announcements about Galaxy's Edge in the US parks.

Star Wars: Galaxy's Edge in the US parks
The new Star Wars area is located on the planet Batuu. Batuu used to be an important hub, but today it has become a little out of focus, but is very popular with those who do not want to be in the focus. Smugglers, space adventurers and shady traders have found a new home here. Everyone who wants to escape the increasing control of the First Order also feels home here. So much for the setting.
But now to the attractions of the area. This is where the Millennium Falcon comes into play! Guests have the opportunity to fly with the Millenium Falcon. Each passenger has a role, from pilot to gunner, which they must fill out to survive a dangerous mission. There is also a second attraction: Rise of the Resistance. Here the guests are in a hangar where a battle between the First Order and the Resistance takes place.
The physical well-being is of course also taken care of. In Oga's Cantina there are drinks and some snacks. There are also two restaurants where all space travellers can get something to eat.
Important for many visitors of the Disney Parks is the meeting with their favourite characters. This will also be possible in Star Wars: Galaxy's Edge. Especially Chewbacca is always in this area, as well as storm troopers and some other heroes or villains from the Star Wars saga.
Of course there are also shops where guests can stock up on souvenirs. These are partly built up like a kind of bazaar, as one knows it from oriental cities.

It is not yet known which of these elements are intended for the Paris area, but surely one or the other of this version of Star Wars: Galaxy's Edge will find its way to Disneyland Paris.