Deals, Packages & Tickets
Buy
Tickets Book a
Package Winter/Spring: Up to 35%
on your package

Action and thrill are exactly what you are looking for in an amusement park? Then we have the right thing for you. We have put together an action tour through Disneyland Paris. Even if Disney Parks have a reputation for being ideal for families (which is true of course) a family includes not only toddlers and seniors, but also teenagers and adventurous adults. Therefore, there are also some thrill rides and roller coasters at Disneyland Park and Walt Disney Studios Park that will take your breath away.
So let's go on an action tour of the two parks at Disneyland Paris. Since there is a manageable number of thrill rides in the two Disney Parks, there are no separate tours at this point, but one tour for both parks. If you want to take the Action Tour as we suggest, you need a hopper ticket or an annual pass that gives you access to Disneyland Park and Walt Disney Studios Park. 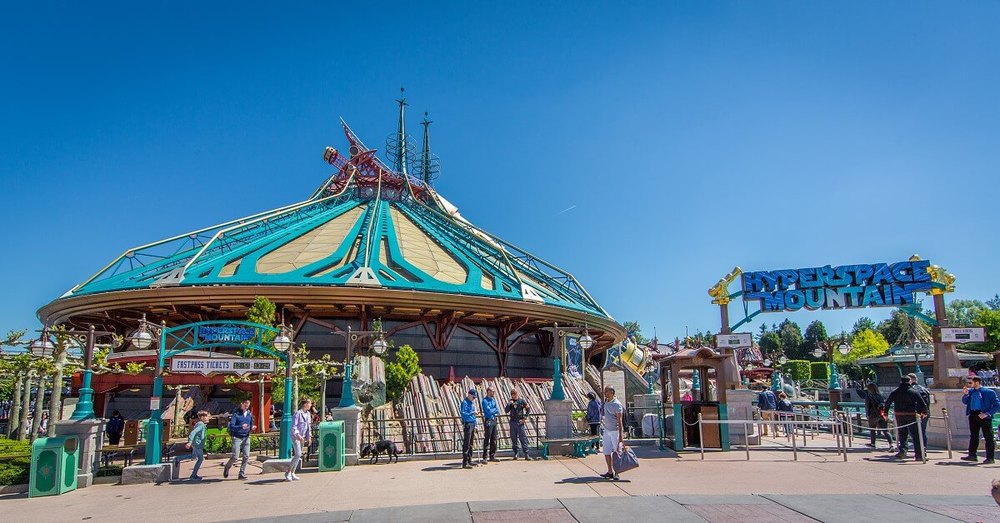 Lets start in the Walt Disney Studios Park. There are two variants here, depending on how long the waiting time for Crush’s Coaster is. Be at the entrance about 30 minutes before the park opens and go straight to Crush’s Coaster. Be quick and with a little luck you can ride this roller coaster with less than a 60 minutes waiting time. Then get a FastPass for Tower of Terror and in the meantime take a ride at RC Racer and possibly the Toy Soldier Parachute Drop.
If the waiting time at Crush’s Coaster is longer than 60 minutes, get a FastPass for the Tower of Terror first and then queue up at Crush. Then it should be time for the Tower, if not go to Toy Story Playland and have a go at RC Racer, otherwise do this after your visit to the Hollywood Tower Hotel.
You have done all the action, thrill and adrenaline section at Walt Disney Studios Park and can switch to Disneyland Park.

First you should go to Frontierland to get a FastPass for Big Thunder Mountain. While waiting for your FastPass window to open, you can walk to Adventureland, where Indiana Jones and the Temple of Peril awaits you deep in the jungle. To save some time we recommend to use the single rider line.
Ideally, now is the time to go back to Big Thunder Mountain. If you have to wait more than 30 minutes to use this FastPass, then go and visit the Pirates of the Caribbean. This is not a thrill ride in the classic sense, but a real Disney classic that you shouldn't miss if you have a little time left.
After doing your round with Big Thunder Mountain, head to Discoveryland. Two action-packed attractions await you here: a 3D simulator and a roller coaster, both of which revolve around the Star Wars Universe.
Get a FastPass for Star Tours and then use the Single Rider Line at Star Wars: Hyperspace Mountain.
Once you visited these two attractions in Disneyland Park, you successfully mastered the Action Tour through Disneyland Paris!